Internet of things: Spanish motorsports driver Isidre Esteve is back in the race

Esteve, now 46, made his name with a string of endurance and rally victories between 1992 and 1999. In 2006, he looked poised to win in the pinnacle of the sport, the Dakar Rally, before a fall forced him to pull out. But the following year, a more serious fall from his motorcycle saw him damage his spinal cord, leaving him in a wheelchair.

“I cannot do the same thing as I did, but I will do other things,’ Esteve said. “I will not run on a motorcycle, but I can do a thousand things in a wheelchair,” he explained.

Including, it turns out, race.

In 2011, he started a foundation to help people with disabilities join or rejoin mainstream society. And more recently, using adaptive technology, he has raced again.

Esteve drives with an adapted steering wheel, which has extra rings acting as accelerator, clutch, and brakes.

Vodafone has sponsored Esteve’s Repsol Rally team in their three races of 2019, including the 2019 Dakar Rally.

He uses a smart helmet, smart features on his race suit, and a smart cushion beneath his seat. Each of these analyse his performance on the road, and make it safer, and possible, for him to compete once again against the world’s best drivers.

“All the development work is done,” Esteve explains.

When Esteve first attempted to return to racing, he suffered a problem with pressure ulcers. Also known as decubitus ulcers, they happen when prolonged pressure from bony areas of the body —  like hips, ankles, and the tailbone — wears down skin. And in some of the worst cases, fat tissue or even muscles and ligaments, too.

The Dakar Rally requires drivers to drive stages up to 800 to 900 kilometres (500 to 560 miles) a day. Ulcers caused Esteve to be hospitalised for months after attempting his first Dakar Rally following his injury.

If there was no existing solution, explained the Spanish driver, he decided he would make one. The process took five years.

The resulting smart cushion consists of round cushioning air cells whose air pressure continually changes, controlled by a custom program running on an app.

“They are like alveoli with air inside, and in each area we decide a maximum and a minimum pressure,” he says. “The cushion varies the pressure to favour blood flow in my glutes, which are under constant pressure, avoiding injuries to the skin,” Esteve says.

The result is a massage effect to prevent ulcers.

“We no longer worry whether the cushion is working or not, because we just assume that it’s working,” he says. The cushion is being made available to wheelchair users through a spin-off startup called Nubolo. 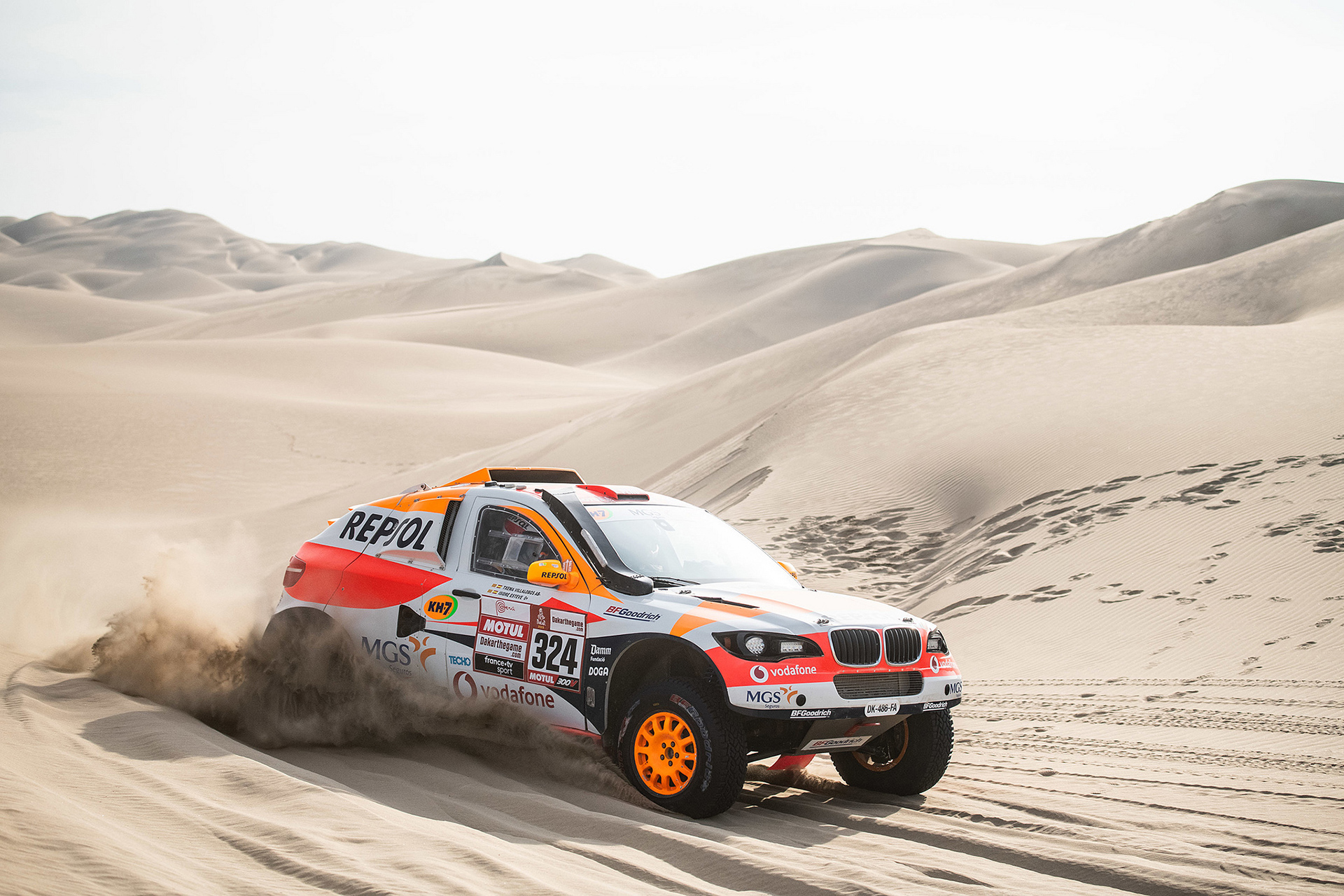 Racing a car with your hands only

The steering wheel is one of his car’s more complex features. The accelerator is the top ring – pushing it inwards speeds up the car.

Then beneath is the brake, “which works by pulling towards me,” he says.

Clutching and shifting through the sequential gearbox is done by lever. All difficult enough even for going to the shops.

But in motorsport rallies, a driver needs to combine steering, braking, and accelerating with changing gears. And, if the driver is Esteve, all without using his feet. He operates the clutch and changes gears “thanks to a lever that I activate with a finger and that I sometimes use to crest the dunes,” which he works with his right hand, he explains. 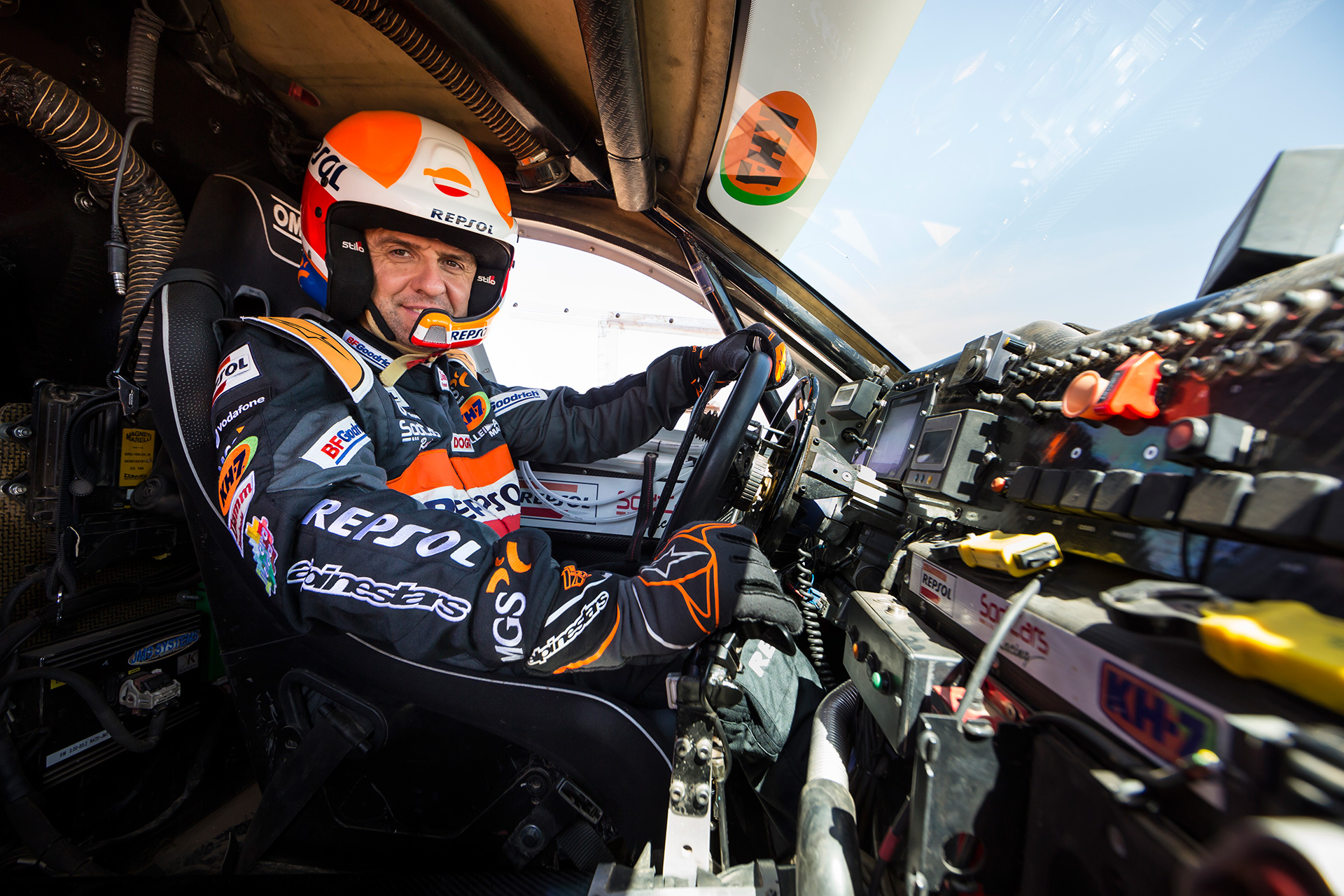 With help from Vodafone, Esteve’s team has been working to develop smarter suits and racing helmets.

In today’s motorsport, the volume of data streaming out of a car and driver is as impressive as the car speeding through the dunes.

Data began to be a driver in motorsports in the late 1980s. Before, basic electronics might control fuel injection systems. But it took increased computing power from microcomputing to log both the driver’s behaviour and how the car behaved as a result – data which at first was logged on floppy disks, and analysed after.

Giving the driver and support crew real-time data, from multitudes of scattered sensors connected to analytics based in the cloud, is a much newer possibility. So innovators like Esteve’s team and Vodafone can now monitor a driver’s heart rate, body temperature, and hydration levels using a smart suit.

A race as long as the Dakar Rally, and in conditions as challenging, means along with tackling the challenges of the road, drivers need to make sure to stay hydrated as well. University researchers in Chile found that dehydration drastically reduces elite motor sport athletes’ physical performance, cognitive function, and alertness. So a smart suit can tell Esteve when he needs to rehydrate.

His team and Vodafone are working on an internet of things-connected smart helmet to relay information a steady flow of information about his body, his car, and the terrain and weather ahead.

And better monitoring of Esteve’s car helps his support team get his BV6 prototype, made by the French firm Sodicars Racing, back to peak performance every night.

“Even the slightest detail, however insignificant it may seem, is crucial in such an extreme race as Dakar, which is very hard on the mechanics,” points out Esteve’s chief mechanic, David Pigem.

The amount of smart technology means Esteve’s car has a very different feel to other automotives.

“There are many buttons and sometimes it is difficult to understand them,” admits Esteve.

“But they end up being part of our day-to-day work. In the end, the car is our office during the Dakar,” he says.

Esteve can no longer walk. But thanks to innovative technological developments – ones which will in the future help both him and many others besides – he’s able to compete as a world class racing driver.