We use our mobile devices for so many things today; to make calls, to send texts, emails and pictures, and for shopping, banking, sharing, listening, learning and downloading.

How does your mobile device work?

The radio waves used by mobile devices are part of the electromagnetic wave spectrum and travel at the speed of light. Your mobile uses radio waves to transmit signals to a network of base stations. Mobile devices need the antennas on top of the masts to send and receive your communications.

Base stations have several elements:

Radio antennas – designed to send and receive radio waves. Usually fixed to a support structure which is known as a mast.

Masts – may be very tall and standalone (sometimes in rural areas), or smaller on the top of a tall building (often in urban areas). In some places masts are called towers.

Cabinets – each base station has a cabinet with equipment to provide the power.

All these elements combined are known as a base station (antenna, cabinet and supporting structure).

A mobile network is made up of many base stations that each provide coverage in its surrounding area.

The base station sends your electrical signals across a network of cables – fibre-optic, microwave transmitters (another form of radio transmitter) or copper cables to a core switching centre. The switching centre then routes your electrical signals back out to your friend or colleague’s mobile device following the same process. Upon receipt, their mobile device converts the signals back into your original voice call or message.

Along the way, key information is automatically included in the electrical signals, such as your mobile number, the length of your communication, a time stamp, the destination phone number and the format.

This means the switching centre can ensure the data or call is routed to the correct destination. This may be another mobile device, a landline or a data network for emails or web content. It also enables a check that your mobile device has not been reported lost or stolen.

All this takes place in a matter of seconds.

Your mobile device transmits your request to access certain content as radio waves, converting them into electrical signals through a network of base stations and cables to the core switching centre. This time, the switching centre acts as a gateway – either sending content directly to your device or enabling content to be sent from other content providers.

The web content is sent out from the switching centre as electrical signals to your nearest base station. This then transmits the signals to your mobile device. Your mobile receives the communication and converts it back into text, pictures, sound or video.

Electromagnetic fields are invisible and can be found all around us. They can occur naturally – for example, from the sun – and are also generated by our everyday use of electricity at home and at work.

Electromagnetic fields are not all the same. They are part of a spectrum and are divided into two main categories: ionising or non-ionising radiation, determined by the energy contained in them.

The diagram below shows different frequencies and divides them into ionising and non-ionising groups. As you can see, radio waves used by mobiles and their masts, as well as remote controls, radios and baby monitors, are classified as non-ionising.

To ensure people are protected, different regulations will apply depending on which frequency is being used.

Authorities including the World Health Organization (WHO) agree there is no evidence that convinces experts that exposure to electromagnetic fields produced by radio waves from mobile devices and base stations operated within guideline limits has any adverse health effects.

WHO on electromagnetic fields and public health

The graphic shows how the electromagnetic spectrum ranges from gamma rays and X-rays at one end, through ultraviolet and visible light, to radio waves, power lines, static electric and magnetic fields at the lower end.

One example of ionising radiation is X-rays, which are important in medical diagnoses and tightly regulated. People who work regularly with X-rays are protected to ensure that they are not overexposed.

Many everyday appliances emit non-ionising radiation while they are connected to an electricity supply and in use. Some examples are: household appliances, mobile phones, WiFi routers and microwave ovens.

Your mobile uses non-ionising radio waves to transmit the electrical signals of a call, text or data from one device to another.

Electromagnetic fields in our daily lives 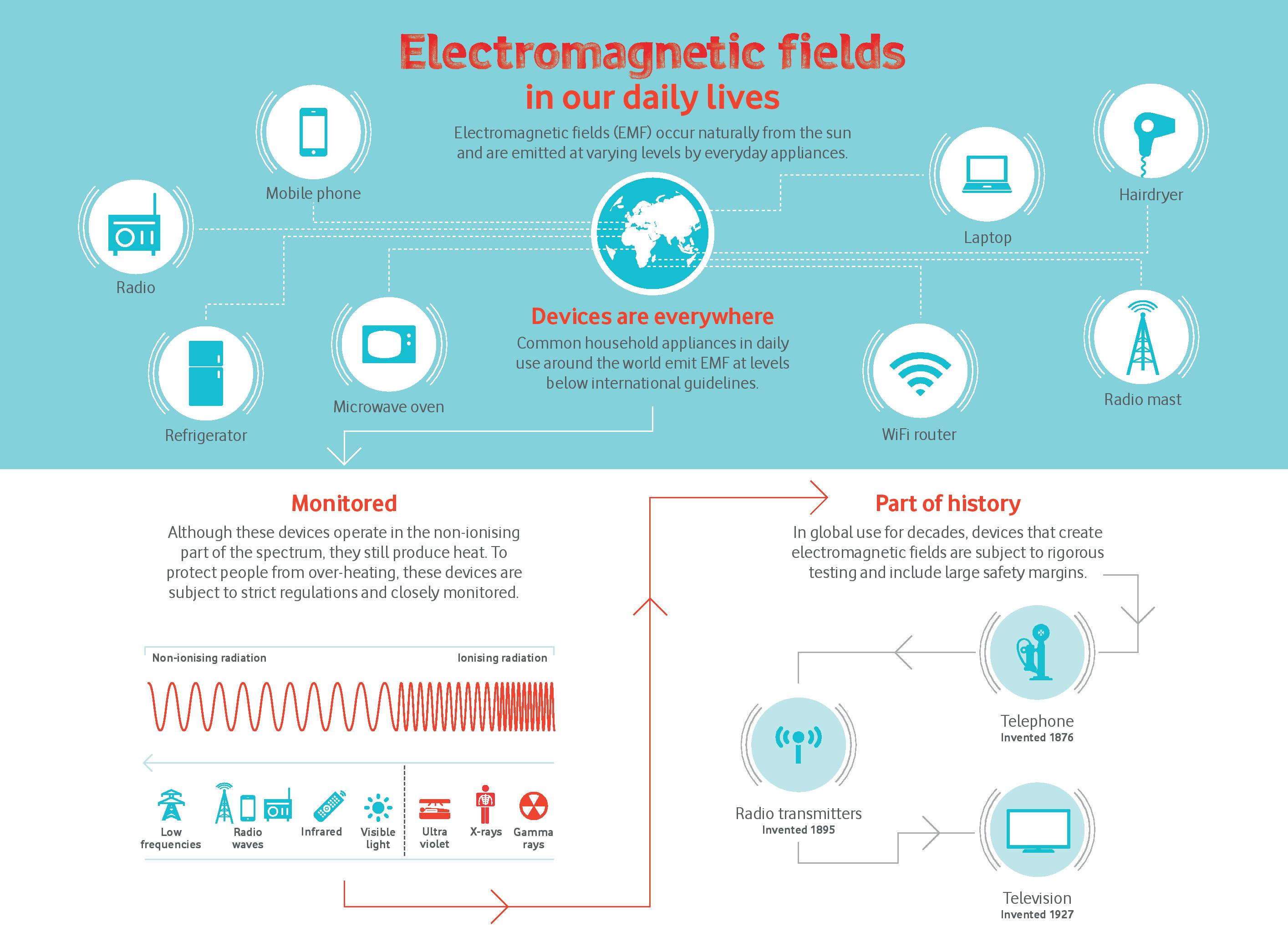 Most of our everyday electrical appliances produce electromagnetic fields while we use them: from refrigerators, hairdryers and toasters to computers, microwaves and wireless technology (such as WiFi, remote controls and mobile phones). These appliances generate or use frequencies that are categorised as non-ionising radiation.

Health: the science and evidence

How do radio wave frequencies differ?

Radio waves ‘vibrate’ at different frequencies, making them useful for different applications, and this spectrum of waves is divided into bandwidths for different uses.

The different frequencies that mobile networks use are auctioned off and bought by different mobile companies to provide the service that customers want.

Visit our publications centre to read our latest studies, position papers and newsletters.