Increased network response times, improved coverage and higher peak speeds have stimulated a significant increase in demand for mobile data. In our European markets, 4G customers are consuming approximately two to three times more data than they did using 3G. Meanwhile, the rapid roll-out of 3G in emerging markets has helped data usage in AMAP increase 78% year-on-year and the number of data users increase by 17% to 128.7 million during our last financial quarter (ended Dec 2015).

As the amount of data crossing our network continues to grow apace, we are always looking at ways to enhance our backhaul network to ensure that vast amounts of traffic moves between our base stations as quickly and reliably as possible.

Fibre is by far the best way for us to do this: it’s high-capacity, fast, reliable and the signal degradation is minimal over long distances. However, fibre is not always available, which means that we have to look at new ways of moving the data. 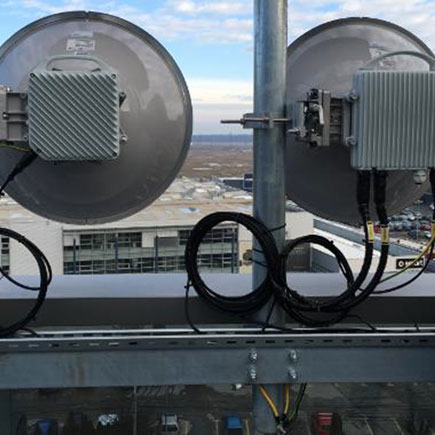 However, working closely with Huawei, we are pushing the boundaries of what is possible with the technology. Recently, in collaboration with Vodafone Romania, we tested a configuration of E-band technology which achieved speeds of 10 Gbps in urban environments with 99.9% availability over distances of one kilometer. In further tests using “Multi Band Link” technology, which is a combination of E-band and traditional Microwave Ethernet, we achieved 4Gbps link capacity in suburban areas between two sites that were seven kilometers apart.

This is a marked improvement in terms of the speed and distance which E-band Microwave technology can transmit data. While we’re still in the testing phase, we anticipate that that the technology will significantly boost the performance of our backhaul network, which in turn will enable us to deliver a faster and more reliable service to our customers.

To date, Vodafone has introduced E-band technology in eight markets. Following the successful tests in Romania, we are now exploring how we can use the technology in other markets.