Over half of the world’s 63.5 million refugees and internally displaced people are children.  The average length of time that someone is displaced is 20 years, meaning a child can be born, raised and do his or her entire schooling in the closed environment of refugee camps with limited ability to access a quality education.

Schools in refugee camps are often under resourced and isolated from the outside world. Isolation also means that cultural norms can remain unchallenged. Along with partners including United Nations High Commissioner for Refugees (UNHCR), the Vodafone Foundation is working to change this. The Foundation’s programmes include the Instant Network Schools tablet-based teaching programme in refugee camps and the recently launched Instant Schools For Africa programme, which will provide young people across five African countries with free access to quality online educational materials - from primary through to advanced high school level.

Fugia, 15, is one beneficiary of the Instant Network Schools programme in the Kakuma refugee camp, Kenya. While members of her community saw no value in girls pursuing an education, with some labelling her a ‘prostitute’ for going to school, Fugia fought for her right to learn.

Worried about what others were saying, Fugia’s mother suggested she drop out of school. Fugia has a heart condition and she used a Vodafone Foundation tablet to demonstrate to her mother how the circulatory system works and how tablet-based teaching can help her to learn. Her mother was convinced and now supports her daughter’s dream to become a doctor.

The Vodafone Foundation’s recently published Connected Education report demonstrated that the benefits of technology in education include: an increase in potential reach; an increase in equal access; an improved learning experience; and ultimately will help to eradicate illiteracy and improve academic performance.

By providing the ability to access world-class, openly licensed global and local educational resources, technology is helping to democratise education in sub-Saharan Africa, for both refugees and those in remote and rural communities with no access to traditional schooling.

The Foundation’s report found that more than 50 million children could benefit from the educational resources made available through a combination of the Instant Schools For Africa programme and the Vodacom e-school, a similar programme in South Africa, if they are widely deployed across Vodafone’s African markets and India by 2025.

The Vodafone Foundation has been pioneering programmes and innovations in a number of countries where it operates to address the challenge that some of the world’s most marginalised communities and citizens have to access education.

Currently, the Vodafone Foundation is working with the United Nations High Commissioner for Refugees (UNHCR) to deliver classroom teaching through the Instant Network Schools programme, which uses specially-designed online educational resources and tablets to bring primary and high school education to children in refugee camps.

Arthur D. Little estimates that the programme - already benefiting more than 43,000 young refugees each month - has the potential to improve the living conditions of 80% of young refugees.

The Foundation’s Instant Classroom is a technical innovation that is part of the Instant Network Schools programme.  It is a single case containing all that is required for tablet-based teaching and was specifically designed for areas where electricity and internet connectivity are unreliable or non-existent.

Fugia’s determination to have an education 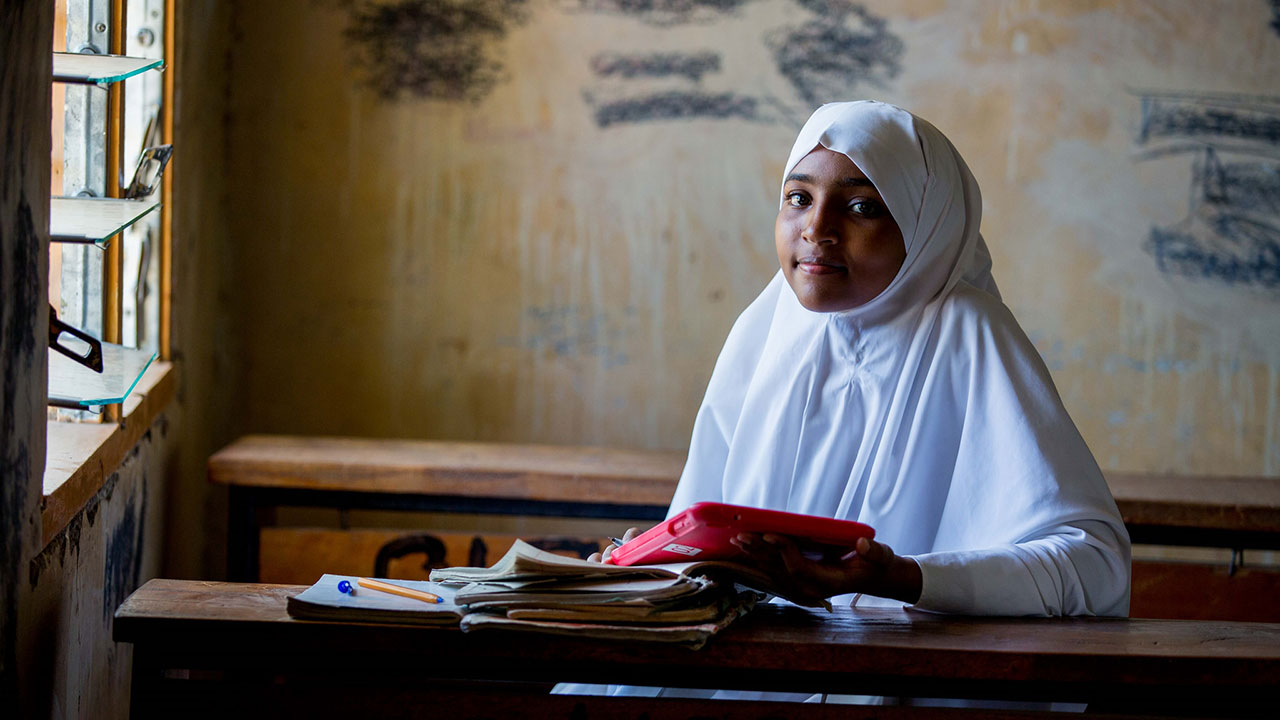 "This opportunity is very rare to many people, especially to us here in the camp. Education is a right. It’s like oxygen for us. A person can never live without oxygen." Fugia, 15, Kakuma refugee camp

Fugia says: "Not every human being gets a chance of going to school. This opportunity is very rare to many people, especially to us here in the camp …. It’s a right. It’s like oxygen for us. I want to become a doctor. Whenever a person gets sick and that person doesn’t have money, I’ll help that person. They will know the reason why I have become a doctor … and that person will also get the passion."