As part of an innovation partnership between Vodafone and Continental, a global leader in the automotive industry, we have tested the use of Multi-access Edge Computing (MEC) to enable a new type of automotive application, powered by Artificial Intelligence (AI).

The project is part of a broader cooperation that started in summer 2018 with the goal to make traffic safer and reduce the potential for danger and accidents through smart technologies like MEC, 5G and Cellular Vehicle-to-Everything (C-V2X).

The motivation for the use case stems from the desire to reduce the number of accidents that involve pedestrians, cyclists and vulnerable road users (like children or elderly people), through recognising potentially dangerous situations in near real-time. This is relevant today (for example, in busy towns and cities) and will gain further importance with the advent of autonomous driving.

From an application perspective, the use case involves a combination of sensor data from an in-vehicle video camera and an AI application pioneered by Continental’s research and development.

The task of the AI application is to analyse in near real-time the video stream from a front-facing video camera in a vehicle like a car. It then decides whether a hazardous situation is happening or likely to occur (for example, children might be about to run across the road).

Sophisticated and compute-hungry machine learning algorithms drive such AI applications today. The question arises, where to deploy such algorithms.

This is where MEC as a new telco technology comes into play. MEC infrastructure in telecoms networks is very much about the deployment of distributed cloud computing infrastructure potentially deep/far inside the service provider’s network, including a radio access network. The concept of MEC is applicable to both 4G and 5G networks as it is agnostic of the type of radio interface in use. The picture below provides an illustration of this.

Processed video data is sent from a vehicle via a 4G or 5G network to a network edge cloud where sophisticated AI is predicting a pedestrian’s intent in near real-time. Picture rights: Vodafone.

Processed video data is sent from a vehicle via a 4G or 5G network to a network edge cloud where sophisticated AI is predicting a pedestrian’s intent in near real-time. Picture rights: Vodafone.

MEC enables non-telco enterprises such as automotive companies also to deploy cloud-computing workloads inside a mobile network. This creates a number of benefits that have been central to the case study here and the relevant tests undertaken.

This is the case because MEC implies cloud-computing platforms inside the mobile network, which can host software like the automotive AI application. Real-time responsiveness will make a bigger difference in autonomous driving in terms of avoidance of accidents, particularly the higher the vehicle speed and the more unexpected or ad-hoc the actions of traffic participants like pedestrians (see image below).

MEC enables low latency through rather direct routing of data traffic from connected vehicles to the closest MEC location in the telecoms network.

Second, MEC provides more choice for automotive system designers and engineers to decide where heavy computation shall happen or not, where to combine the information content from different connected sensors (also called ‘sensor fusion’), and how to structure the overall service design.

Given the edge cloud infrastructure in the telco network, selected computing tasks, which the engineers would otherwise allocate fully to a vehicle, can now be offloaded to the closest edge cloud datacentre.

Equally, some application parts, otherwise hosted in a central cloud, can now be moved into closer proximity to vehicles for the sake of improved response time.

Modern AI applications benefit from hardware acceleration. Special purpose chips like graphics processing units (GPUs) have long proven their worth for graphics-intensive gaming applications, but for a number of years they have been shown also to increase the performance of machine learning applications by orders of magnitude. However, these high-performing GPUs are very expensive and are subject to a quick technology innovation cycle. Thus, by hosting an AI application in the network edge cloud, the application can have access to more powerful hardware acceleration, as that is available in the network and can be consumed like any other cloud resource (see picture below).

It further avoids such hardware getting out of date throughout the usage period of the vehicle. 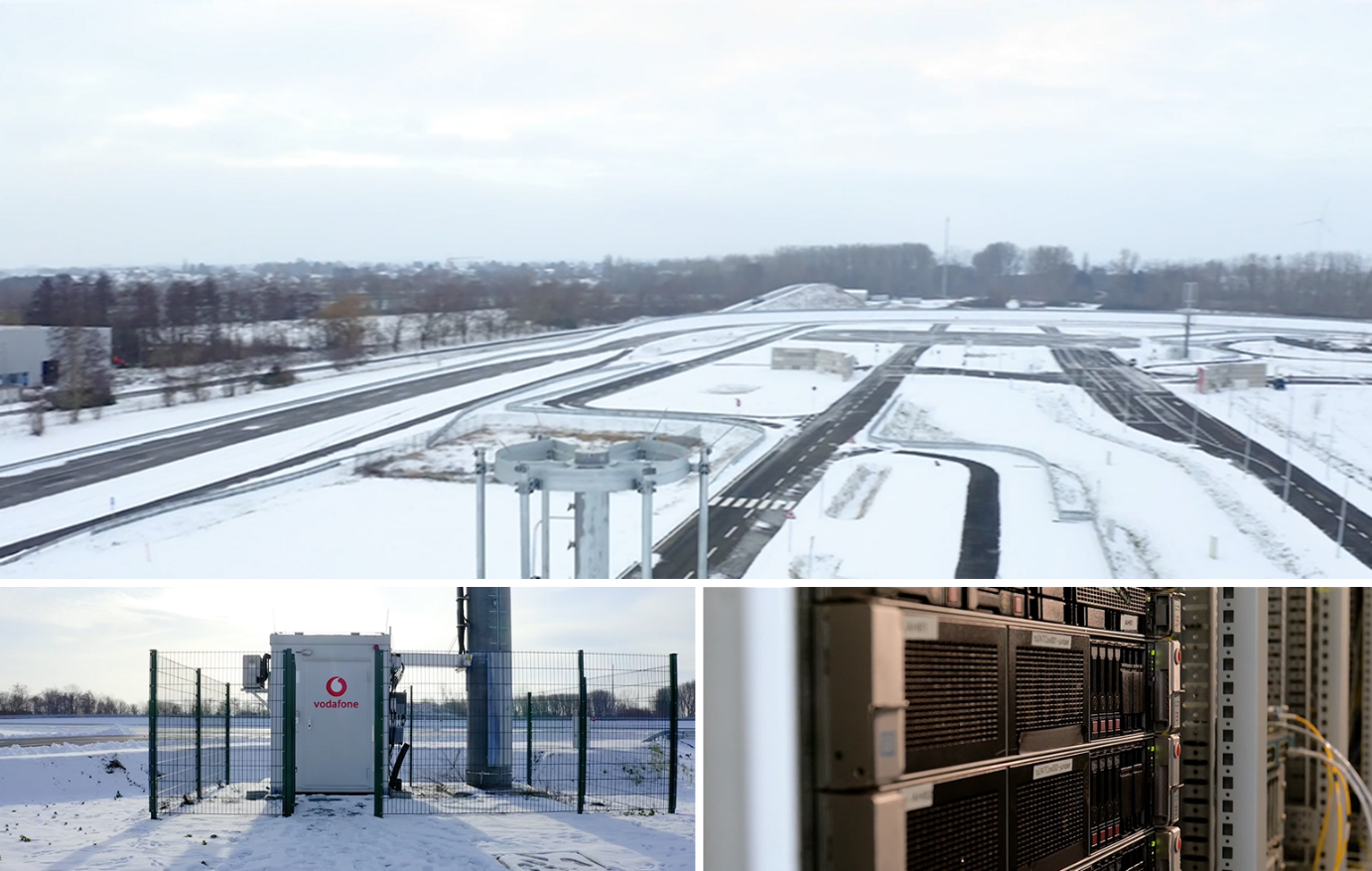 This drives economies of scale as the same special hardware can serve many cars in contrast to just a single one.

It also leads to less power consumption per vehicle and less cost spread out to all participating vehicles.

Finally, when an essential part of the server-side AI application is hosted in a distributed way in the mobile network instead of in a central cloud outside the telco network, we can significantly reduce the volume of backhaul traffic towards such central clouds, which is highly important in the future. Analysts forecast ExaBytes of data per month by 2025 created from connected cars alone.

The project team consisted of Continental (developers of the new application) and a cross-functional team from Vodafone, Juniper, Saguna, Xantaro and Netrounds.

The team deployed MEC and edge cloud computing infrastructure directly at the outdoor automotive test track of the Aldenhoven Testing Center in Germany, the home of Vodafone’s 5G Mobility lab.

After the project team had deployed the AI application onto the edge cloud, a series of drive tests were undertaken supported by Xantaro. This permitted Continental to analyse robustness of the AI application e.g. in the face of varying radio conditions, radio cell traffic load and vehicle speeds, and the Vodafone team to analyse the performance of the technical end-to-end configuration (see picture below).

As a conclusion, the project has further underpinned the value of an outdoor test environment with edge computing capabilities for the automotive industry. It has also demonstrated the usefulness of the network edge cloud together with the widespread 4G (LTE) technology. The new 5G radio interface will boost available bandwidth per vehicle and can further enhance application responsiveness and accuracy of prediction in this particular use case.

We will show results at the Mobile World Congress in Barcelona, 25 – 28 of February 2019. See Vodafone in Hall 3, booth 3D30 for a demonstration and Continental in Hall 6, booth 6B50 for more information.