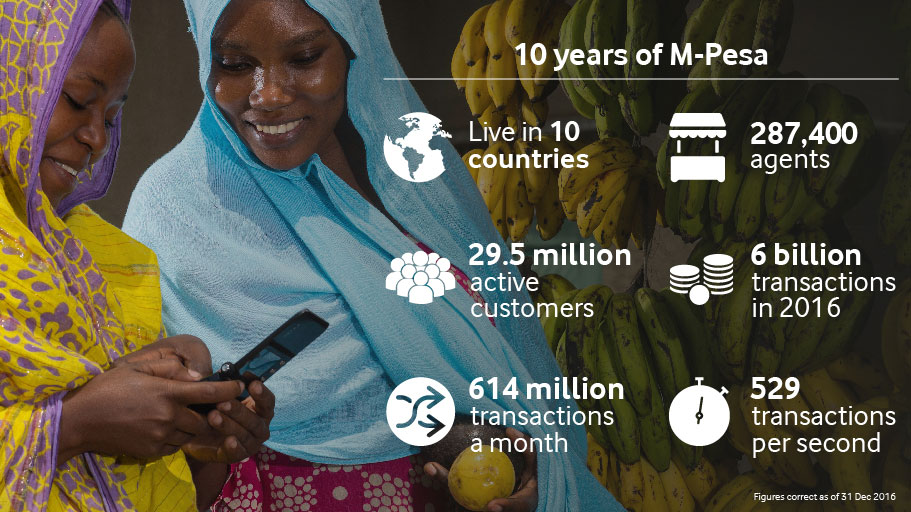 As Vodafone marks the 10th anniversary of M-Pesa, the world’s leading mobile money service, it was revealed that a record 614 million M-Pesa transactions were processed during December 2016.

Vodafone now offers M-Pesa services in 10 countries: Albania, the Democratic Republic of Congo, Egypt, Ghana, India, Kenya, Lesotho, Mozambique, Romania and Tanzania. As of the end of December 2016, M-Pesa served almost 29.5 million active customers through a network of more than 287,400 agents.  During 2016, the service processed around 6 billion transactions, peaking in December 2016 at 529 transactions every second.

M-Pesa was launched by Vodafone’s Kenyan associate, Safaricom, on 6 March 2007. The service is designed to enable customers safely and securely to send, receive and store money via a basic mobile phone and, more recently in some markets, using a smartphone app. Customers visit an M-Pesa agent to top up their M-Pesa account and are then able to use their mobile phone to make purchases in shops and send money to other people who can then visit their nearest M-Pesa agent to withdraw their funds.

M-Pesa also reduces significantly the potential risks of street robbery, burglary and petty corruption within cash-based economies where only a small proportion of the population benefit from access to conventional financial services.

Vodafone Group Managing Director of M-Pesa, Michael Joseph, said: “M-Pesa is a revolution that has empowered tens of millions of people in some of the poorest communities in the world to start and grow businesses and gain greater financial resilience. All of us at Vodafone are very proud of how M-Pesa has enhanced our customers’ daily lives and helped them plan for the future with confidence.”

Advanced banking services for all

Over the last decade, M-Pesa has evolved far beyond its roots in person-to-person transfers. The service now plays an important role in the broader economies of several countries and is used for a wide variety of essential transactions including the payment of household bills and salaries, the distribution of pension payments and the disbursement of agricultural subsidies and government grants. M-Pesa customers can pay for goods and services both at retail stores and online. Services such as M-Shwari, M-Pawa and KCB M-Pesa provide interest-bearing mobile savings and small micro-loans in partnership with the banks CBA and KCB. M-Tiba allows customers to send, save and spend funds on medical treatment at partner clinics and hospitals.

In 2013, the Vodafone Foundation engaged M-Pesa to provide access to essential health services, known as ‘Text to Treatment’. In Tanzania, M-Pesa is used to distribute expenses and hospital transport costs enabling around 1,000 mothers a year to benefit from free surgery to correct the debilitating post-natal condition, obstetric fistula. An emergency maternal transport service utilising M-Pesa-funded taxis in northern Tanzania supports life-critical intervention for around 200 women and newborn babies every month. In Lesotho, mobile health clinics using M-Pesa to fund patient transport are bringing primary care and mother and child HIV services to 200 rural villages for the first time.

Andrew Dunnett, Director of the Vodafone Foundation, added: “M-Pesa is a critical component of many of the Vodafone Foundation’s core health services, such as the Text to Treatment services we have launched in Lesotho and Tanzania. These services dramatically improve quality of life and in many cases, save lives – particularly in some of the remote and isolated areas that we serve.”

According to a recent study conducted by MIT and published in the journal Science, M-Pesa has had a dramatic impact on the overall economy in Kenya – lifting some households above the poverty line and particularly benefiting families headed by women.  In one notable example, poverty fell 22% within a kilometre of where six M-Pesa agents opened between 2008 and 2010.  In Tanzania, financial exclusion was lowered by 50% as a result of mobile money services (source: Finscope 2013).

The M-Pesa Foundation, established in 2010, is an independent charitable trust investing in projects that improve the social and economic status of Kenyans. Funded by M-Pesa, it has supported a number of large-scale health, environmental, conservation, education and water projects - including the M-Pesa Foundation Academy, a boarding high school serving talented but disadvantaged Kenyan students with demonstrable leadership potential.

Key milestones in the development of M-Pesa include:

Vodafone is one of the world’s largest telecommunications companies and provides a range of services including voice, messaging, data and fixed communications. Vodafone has mobile operations in 26 countries, partners with mobile networks in 49 more, and fixed broadband operations in 17 markets. As of 31 December 2016, Vodafone had 470 million mobile customers and 14.3 million fixed broadband customers. For more information, please visit:  www.vodafone.com.