Fast forward: “My job is to win the race”

Formula E season six is just around the corner, with the first race on 22 November 2019. Simona de Silvestro – test driver for the Porsche Formula E team – gives us a sneak peek at what to expect in the new season, and talks testing, development, and how the sport is becoming more inclusive.

Simona de Silvestro is no stranger to the racing world, winning the Indianapolis 500 Rookie of the Year in 2010, driving for the IndyCar Series in 2013 and, most recently, racing in the Australian Supercars Championship.

The 31 year-old Swiss native has now moved into the world of electric cars as a test driver (and Porsche’s first female driver), giving her a unique insight into the technology behind Porsche Formula E.

How has it been going so far with Porsche?

It’s exciting, it’s definitely new, and getting the trust from Porsche to drive for them and to be involved in the Formula E programme is really exciting. I’m feeling privileged to be joining them.

What are you most looking forward to this season?

I think that our team is going to be the best one. To be as quick as possible – that’s what we are here for, that’s our job.

There is definitely a lot of work on ahead to improve in every race, and there’s a contribution from all of us, from working in the simulators to everything else. Just seeing the growth, I think that’s going to be really good. 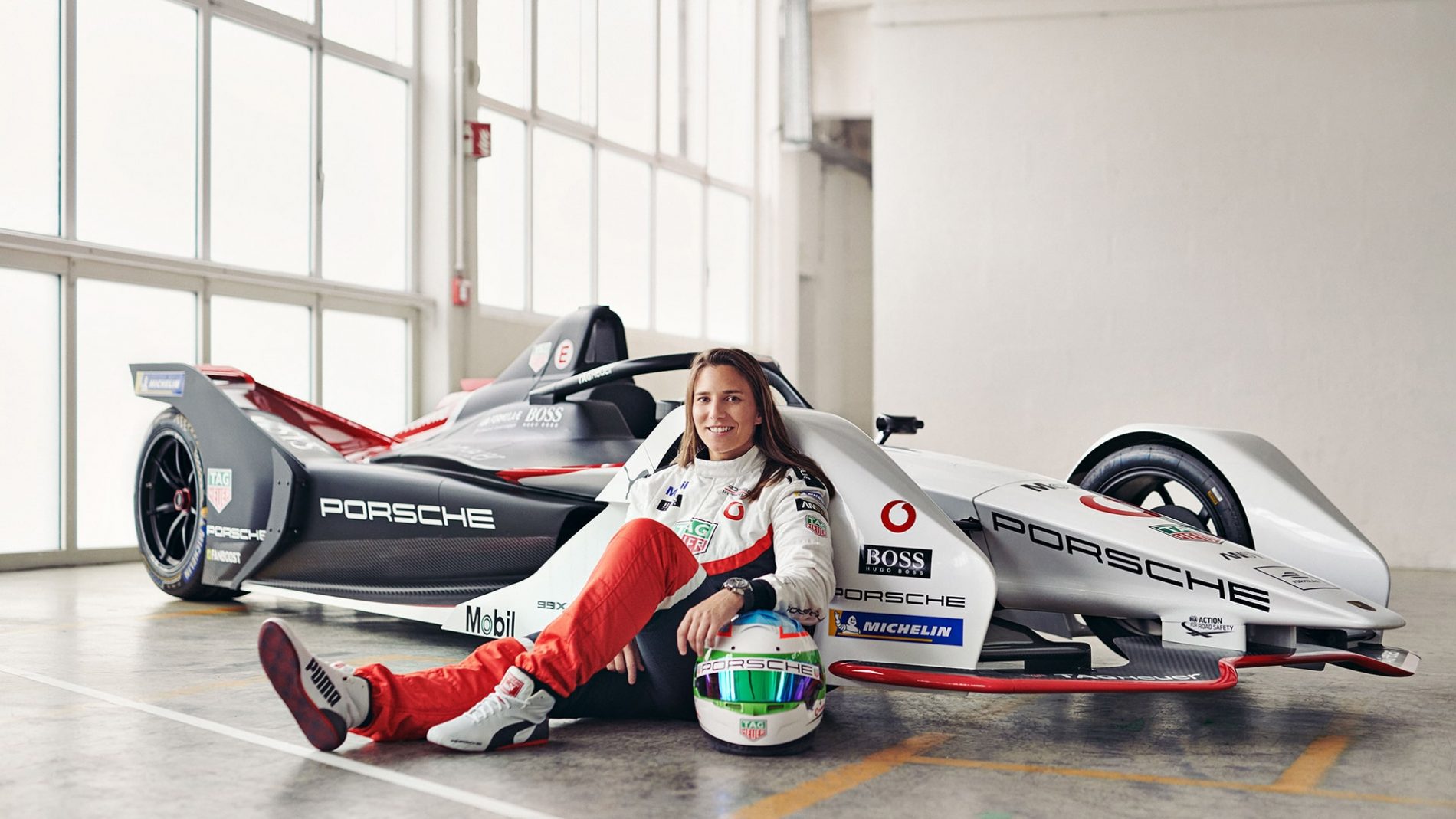 Can you explain what is involved in being a test driver?

It’s quite a busy role actually. Next year, there will be quite a lot of testing with the development cars. As a driver, I’m involved to give feedback on testing out the different software in the simulators.

I also need to go to the tracks as the third driver, so I’m ready to jump in if anything happens to the main drivers.

How do you work with the engineers on testing and developing the technology?

In normal racing, especially with the chassis and things like that, the more racing experience you have, the more you understand what you need in a race car to be quick.

With time, these are things that you start to work on and develop with the engineer to get to where you need.

Now in Formula E, it’s a bit different because of the software. You need to get the feeling of the car, like when you’re breaking, and that’s all down to the software.

I give this kind of feedback to the engineers for them to iron any problems out. I don’t think I would ever be sat in front of a computer, but you need to understand how it all works.

The more you understand it, the better you can communicate it with the engineers, so the work is more efficient.

It’s a tricky one. As kids we always thought about Formula 1 because that was our generation, but I think for the future it’s definitely Formula E.

Formula E is growing so quickly. I’ve seen the development of the electric cars over the last five years, and it’s quite amazing.

Formula 1 have recently outlined plans to have net zero carbon emissions by 2030 – do you think this impacts Formula E?

I think it’s great that they’re doing that because at the end of the day, it’s our planet, and everybody has to contribute to it.

But I think Formula E is really advanced in what it’s doing. It’s the only purely electric racing, and so I don’t think it’s really going to affect it to be honest.

If we look at how good the cars look now, and how quick they are becoming, especially with the competition from all the manufacturers, I think it’s going to keep growing.

“No matter if you’re male or female, it doesn’t matter … we all wear the helmet and we just try to do the best job we can while we are racing - and that’s winning the race.”

What are the biggest misconceptions about racing drivers?

A lot of people think that it’s not really a sport, because a lot of people drive a car around the street and they think it’s quite easy.

But it’s actually quite an intense sport, and you’re driving this machine at the limit, and it’s quite physical, and also mentally quite tough because you make split decisions and they can be right or wrong. Many people think that it’s just like driving on the normal road.

Are you ever scared when driving?

Not at all – if I was scared, I would have to quit I think.

Once you are in the race car, you become one with the car and you just try to push the machine as much as you can – that’s the thrill of it to be honest.

Sometimes things do happen though. In 2011, I had a really big crash at the Indy500 and burned my hands pretty badly. That was a big reality check – things can happen, but you’re in your element so you don’t really think about it.

What kind of driving do you do when you aren’t on the racetrack?

I’m from Switzerland, and we have awesome roads there. Going up to the mountains is always cool, because there are some cool turns and things like that.

Most of my friends tell me that I drive like a grandma on the road, so I don’t know if I’m the perfect example. I get the racing part out of my system on the racetrack, so I’m pretty chilled on the road to be honest.

What is your earliest memory of driving?

I was four. My dad did a go-kart demonstration at the dealership, and took me round on his knees because I was too small to drive.

I remember that I cried for the whole day because I couldn’t drive by myself, so I think that I annoyed him enough that by the end of the day he said that once I grew a little bit he would get a me a go-kart.

By the time I was seven, I got my first go-kart and that’s how my journey started. To be honest racing was really the only thing that was on my mind from a young age.

Would you say your dad was the person who encouraged you most?

Definitely my dad, he’s a big car nut. He has worked on cars his whole life, so definitely I got the “car bug” from him.

But really I wouldn’t be here without both my parents. We would spend most of our holidays on go-kart tracks, so it was a big family thing that we ended up doing.

At the end of the day, you need people who will support you in what you are doing. I’ve been pretty lucky so far.

What has your experience been like as a female driver in such a male dominated sport?

You know this is a funny question that I always get, because as a young kid, I never really thought about being a girl – I was like, I’m a race car driver.

And yes, I’m a woman, but I don’t really care. My job is to be the best driver, no matter if you’re male or female, it doesn’t matter.

At the end of the day, we all wear the helmet and we just try to do the best job we can while we are racing – and that’s winning the race.

When I was younger, there were no female drivers, it was only guys. I was a big Michael Schumacher fan, and that was who I wanted to be.

With me being in this position now as a female driver, it’s quite cool and it’s a bit of an honour as well.

I think the message here is really to persevere, even though maybe it’s not the easiest path or the most logical path for a girl.

I was always driven to be a race car driver and here I am today, so I would say that’s the message.

Do you have any advice for anyone who wants to get into racing?

Well, I think it’s a bit of everything: don’t be afraid to pursue what you believe in. The big thing is believe in yourself and make sure the people around you know what your ambitions are.

In racing, you’re really dependent on a lot of factors.

When you’re in the car, a lot of elements come together – it’s not just you – it’s about teamwork, so you need to get the people around you to have the same focus to achieve what you want to achieve.