Will you #BeStrong and stand up to bullying on Snapchat?

At Vodafone, we believe in the importance of helping teens be stronger and not only stand up to bullying for themselves, but also for others.  So we have developed a set of new emojis which help to communicate compassion and support, where words are not enough. Providing a virtual hug, or show of support, to help friends through a difficult time. We have seen that a positive response can prevent the ‘crowd-mobbing’ activity which so often occurs and is almost becoming the norm today.

Snapchat, the mobile platform with over 100 million global daily active users, is offering the #BeStrong anti-bullying emojis as Geofilter photo overlays during Anti-Bullying Week.  Geofilters are special artistic overlays for ‘Snaps’ and will allow millions of Snapchatters across Europe to take a stand against online bullies. 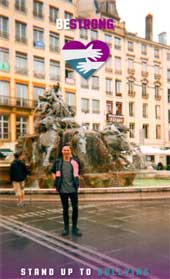 The #BeStrong emojis were designed in response to an 11-country survey commissioned by Vodafone from YouGov**, where 72% of the teenagers surveyed said they would welcome an emoji they could share with friends being bullied online to show their support.

It’s not enough though just to provide support after the bullying has happened. Vodafone also wanted to help young people become more emotionally resilient to prevent bullying and so have worked with The Diana Award on a learning module for schools, to help teens ‘Be Strong’. This is the first in a series of learning modules aimed at teenagers, which cover subjects from ‘selfies ‘and ‘online gaming’ to ‘social networking’ and ‘coding’. Further learning modules will be released over the next year on www.bestrongonline.co.uk,  including The Diana Award and by many of Vodafone’s markets. Each module provides resources needed for teachers to train a small group of students to deliver short lessons to other students at school. The modules also include advice for parents. We have already had over 250 downloads of these modules in the first month, reaching over 11,000 children.

Please show your support by downloading and sharing the emojis on the following link: https://www.flickr.com/gp/vodafonegroup/pK5215. Include the #BeStrong in your messages.

**All figures, unless otherwise stated, are from YouGov Plc.  Total sample size was 4,720 13-18 year olds in the UK, Germany, Italy, Spain, Netherlands, New Zealand, Greece, South Africa, USA, Ireland & the Czech Republic. The figures have been given an even weighting for each country to produce an ‘average’ value.

Lisa Felton is the Head of Consumer Policy at Vodafone and leads on global initiatives focused on providing tools and education to children to ensure that they are safe and secure online.