A simple phone call: the best wedding gift ever

Everyone has them. Those occasional days when you just want to burst into tears, usually from frustration, tiredness or impatience. But once in a while you get a day where they're tears because you have an overwhelming sense of pride having made a real difference. I'm very humbled to say I had the latter today.

I’m part of a team of team of specially trained personnel from the Vodafone Foundation Instant Network programme who are working with Vodafone Fiji to re-establish telecommunications in the wake of Cyclone Winston, considered one of the most powerful storms ever recorded in the Southern Hemisphere.

On 20 February Winston blasted its way across the Fijian island group. With average wind speeds of 230 kilometres per hour (kph) and some gusts in the vicinity of 350 kph, the massive tropical storm flattened entire villages, wreaked havoc on infrastructure, decimated crops and left the country of 900,000 reeling in its wake. To date, a reported 44 deaths have been recorded.

Our first priority was to establish a communication link between Fiji’s islands to help officials and relief coordinators assess and report on the damage. Leaving some colleagues to do a full set up and test of our VSAT phones and kit, I hitched a ride with some Vodafone Fiji engineers to the north-eastern island of Taveuni to set up a small calling operation with three satellite phones.

Within minutes of landing at the island’s airport in Matei, I fired up the sat phones, hollered, “who wants to make a free call home?” and was promptly surrounded by some extremely surprised and grateful people.

Aaron and Nikki Faulls of Los Angeles had only tied the knot an hour before I arrived. To say that they were anxious to talk to their family about their roller coaster Pacific getaway would be an understatement. 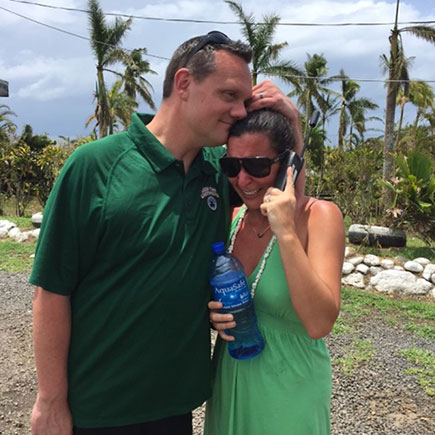 “We have the best wedding story ever,” Aaron said.

Aaron had visited Taveuni once before and surprised Nikki by secretly arranging a wedding ceremony on the island. What was meant to be a beautiful beachside honeymoon turned instead into them sheltering in a shipping container as the cyclone swept past.  “I thought we were gonners,” Nikki told me.

The last email they sent warned family and friends that their holiday might be disrupted by a category four storm - not the category five that arrived 20 minutes later.

The newlyweds were very grateful when we arrived an hour later to restore some communications.

As I left to board the Island Hopper aircraft to make the 127 nautical mile journey back to Suva via Savusavu, I even got a standing ovation!

In other words, it was a day worthy of shedding a few tears of pride and joy, a day where the Vodafone Foundation Instant Network team really made a difference.

See Aaron and Nikki’s story in their own words below:

The Vodafone Foundation has a team of volunteers, all Vodafone employees, who travel to countries after natural disasters to restore communications. The Vodafone Foundation Instant Network is a 100kg mobile network in four suitcases which can be taken on a commercial flight. The team has a range of other equipment at their disposal including the Instant Network Mini (which fits in a backpack) and the newly launched Instant Charge, a durable and portable outdoor mobile charger to which 66 devices can connect simultaneously.

The Vodafone Foundation Instant Network programme has deployed to five emergencies and disasters including:  Vanuatu in response to Cyclone Pam; the Philippines in response to Typhoon Haiyan and Typhoon Bopha; Kaikor in Kenya in response to severe drought; and most recently Greece to provide mobile charging and internet connectivity to refugees entering Europe.  It has enabled over 3 million calls to be made by refugees, misplaced people and those whose lives have been devastated, since it began in 2012.

Lisé Mackie is Vodafone New Zealand’s Government Marketing Manager. She is a trained volunteer for the Vodafone Foundation Instant Network team and was first deployed with the equipment in 2015 to the Republic of Vanuatu, to help restore communications to areas devastated by Cyclone Pam.