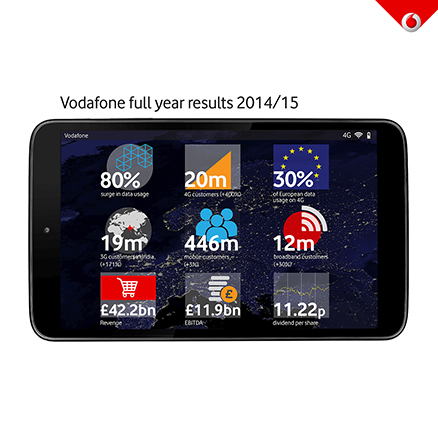 Guidance for the 2016 financial year4

“It has been a year of continued progress, culminating with a return to organic growth in Q4. We have seen increasing signs of stabilisation in many of our European markets, supported by improvements in our commercial execution and very strong demand for data. In fixed line, revenue trends are improving supported by accelerating customer growth, and our recent cable acquisitions provide a strong platform for further growth. In emerging markets, our good growth trend has continued, driven by rising data penetration and leading network quality and distribution.

“Our Project Spring investment programme is on plan, delivering a significantly improved experience to customers. In Europe, 4G coverage now extends to over 70% of our footprint, and voice quality and reliability have improved noticeably. We now reach 28 million homes with our own, next generation cable and fibre networks. In India, our 3G footprint now reaches 90% of target areas, with 3G data revenue up 125% year-on-year in Q4.

“We have significant opportunities ahead of us, with only 13% of our European mobile customers using 4G, and our market share in fixed services only a fraction of our share in mobile. In addition, businesses around the world are increasingly looking to put mobility at the centre of their own strategies. With the assets and skills we have today, further enhanced by the completion of Project Spring, we will be strongly positioned to provide ever improving services to customers and seize these opportunities.”

*   All amounts in this document marked with an “*” represent organic growth which presents performance on a comparable basis, both in terms of merger and acquisition activity and movements in foreign exchange rates. See page 28 for “Use of non-GAAP financial information”.

1   Free cash flow for the year ended 31 March 2015 excludes £336 million of restructuring costs (2014: £210 million), a £365 million UK pensions contribution payment, £359 million of Verizon Wireless tax distributions received after the completion of the disposal, £328 million of interest paid on the settlement of the Piramal option, £116 million of KDG incentive scheme payments in respect of liabilities assumed on acquisition and a £100 million (2014: £100 million) payment in respect of the Group’s historical UK tax settlement.

2   Year ended 31 March 2015 includes the recognition of £5,468 million of deferred tax assets in respect of tax losses in Luxembourg. Year ended 31 March 2014 included the recognition of a deferred tax asset in respect of tax losses in Germany (£1,916 million) and Luxembourg (£17,402 million) and the tax liability related to the rationalisation and reorganisation of our non-US assets prior to the disposal of our stake in Verizon Wireless (£2,210 million). Basic earnings per share for the year ended 31 March 2014 also includes the gain on disposal, results and related tax charge of the Group’s former investment in Verizon Wireless.

3   Adjusted earnings per share from continuing operations excludes the gain on disposal, results and related tax charge of the Group’s former investment in Verizon Wireless in the prior year and the recognition of deferred tax assets in both years.